The typical workplace is a purposeful social environment. It has to achieve outcomes and it should support the safety and well-being of employees and leaders. But there is a substantial disconnect here – not as much between those potentially-conflicting goals as in how to enhance both so that they support and enrich each other.

Success criteria for an organisation can usually be expressed in things that can be measured. Organisationally, these are typically expressed as budgets or goals which can be linked to profitability, customer satisfaction, DIFOT, innovation, safety, staff retention, shareholder value, market share, employee engagement and many other quantifiable measures. Many organisations reflect these in group and individual KPIs, so that individuals and groups. The hoped-for upside is that employees can measure and manage their own attention, effort and performances, often with tangible rewards offered for achieving or exceeding criteria. The feared downside is that KPIs can create pressure which leads to distress, blame-shedding and avoidance of responsibility. So what does a neurobiological view tell us?

Motivational neuroscience and the fear response are highly influential here. 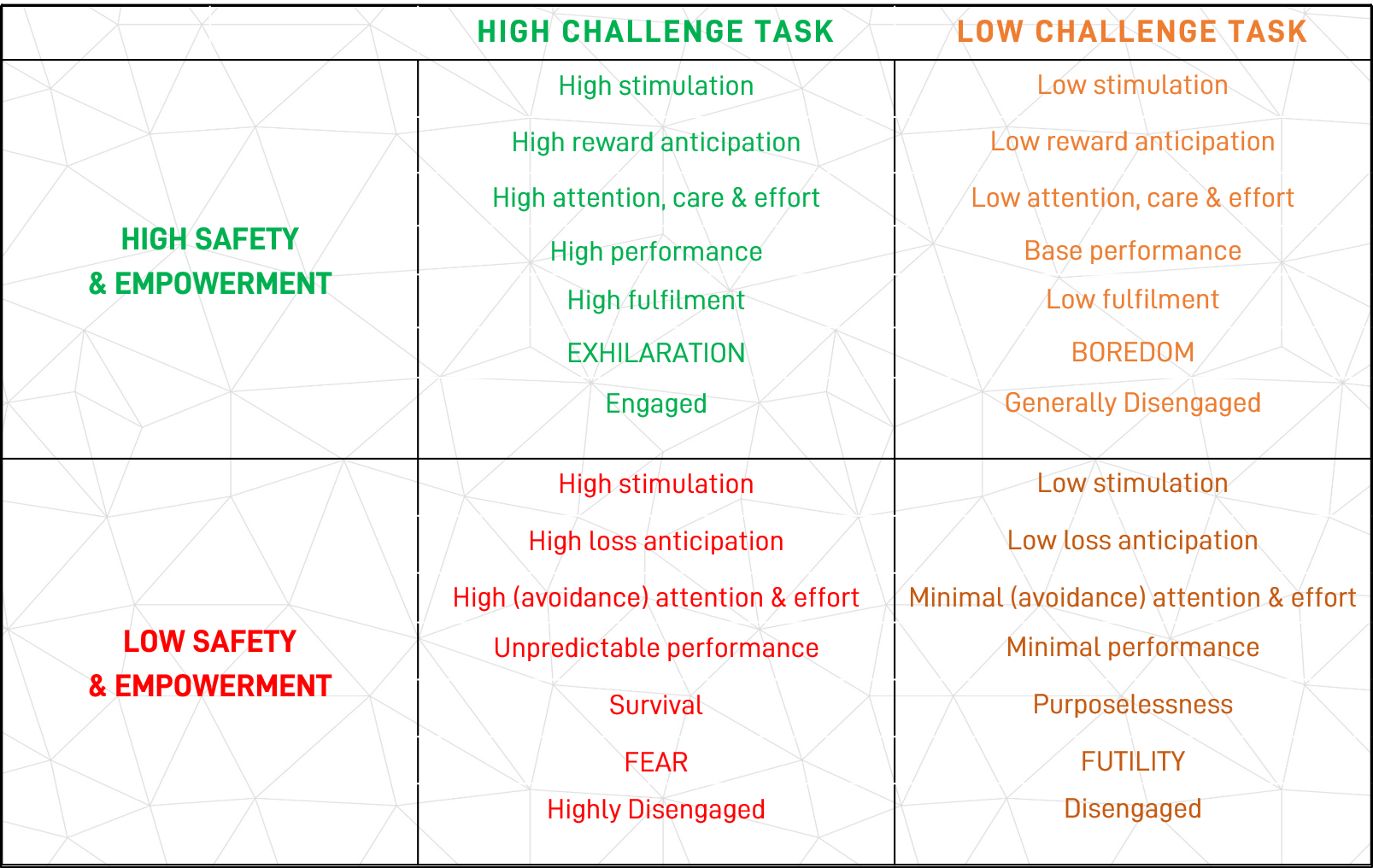 Put together this has some fairly straightforward implications:

It is apparent that the greatest advantage to not setting and managing performance targets is unlikely to benefit employees, unless their experiences have taught them that distress and failure (loss) are more likely than success and fulfilment (gain). More often, and far more likely, the failure to set meaningful performance criteria is a reflection of management’s fears, not the fears of the team. For example, what if a criteria is set and not achieved? What does that say about the manager? What does it mean for follow-up conversations? Might there be arguments or upset? What might it mean for team morale? The prospect of these losses – potentially involving everyone on the team, weigh more heavily in the manager’s motivational processing than the prospect of gains to achievement and success for individuals, the team and the organisation.

But is performance only about numbers?

Typical arguments against this view come from the idea that some people perform better and happier without performance criteria or that success can’t be measured as KPIs for some roles, or that they might be inappropriate for some organisations. These arguments are, for those people in those contexts, undoubtedly true subjectively and/or objectively if KPIs are viewed only as a quantitative measure. If, however, a qualitative approach is taken, such as therapists use in reflection and supervision, performances can be reviewed by the person best placed to estimate them in accordance with their own goals and standards with a view to ongoing self-improvement and, presumably, outcomes. In this case, the role of the manager might be seen as a facilitator, a supporter, an enabler – possibly even a coach.

Challenges can be set and performances managed in other difficult-to-objectively-measure roles using similar methods. For example, a receptionist might be asked what his goals are for a day at the start, how he felt they went at the end of the day, and how he feels about that. This simple process empowers him to live up to his own preferred self-image by setting his own meaningful goals and holding himself accountable for achieving them. He is more purposeful, focused, energised and rewarded (engaged, fulfilled) than if he simply turned up, did his time and went home (disengaged, unfulfilled).

There are some social enterprises, perhaps including volunteers, where performance, and therefore performance criteria, can be largely irrelevant. In some of these for-profit and not-for-profit enterprises culture and mutual support are more important than numbers alone. Unfortunately, without satisfaction coming from useful achievements, this can see them becoming political as individuals satisfy their basic needs competitively through pursuing social dominance, control or enhancement of a preferred identity, all things that can happen in any organisation but more likely where other sources for basic need satisfaction are minimised. Management in this type of environment is also likely to be more effective in enhancing performance and fulfilment through private and group goal-setting, self-management, achievement and reflection. Similar to the techniques noted for therapists above, this is simply a different take on performance management, where performance standards are more intrinsically-biased and rewarded, with the potential to become more meaningful, empowering and fulfilling, underpinned by strong interpersonal connections and loyalties.

Managing fear of loss as a positive motivator

It is not necessary (or perhaps possible) to remove the prospect of loss from how poor performance or behaviour is managed. However, it is important to create certainty about it, and empower people to act to minimise it in ways that are clear, simple and achievable without much thought. There is currently a populist figure who espouses “great leaders make you feel safe” as a headline, but that is an ideal not founded in a meaningful definition of “greatness” or in neuroscience. Rather, in pursuing effort, engagement and well-being within a social system, useful leaders, and the system itself, allow people to act and take basic precautions so that they can feel safe. The fastest neural response network is dedicated to it. We are programmed to learn from fear and pain.

The pursuit of safety is our most primal drive and it is impractical to remove action choices from their consequences so that, no matter what, safety, however it might be interpreted, is guaranteed. Rather, a “safe” culture (including the workplace) sets out the rules around safety very clearly – for example, don’t cross against the red light or you may be killed, don’t turn up late day after day, or do things that are unsafe to others at work, or you may lose your job. The presence of some prospect of loss is not the problem – a loss of empowerment over whether the prospect of loss becomes likely is the problem. Where employees are aware of threats and are empowered to do the things that mitigate or eliminate the chances of loss allows them to choose to play their part in assuring their own physical, psychological and social safety, including how they perform and behave at work.  This applies equally for all people in every situation in life – work is no different.

Where fear of loss is felt to be outside of the understanding and/or control of an employee, expect the fear response to kick in due to both the perceived presence of the threat and personal loss of control. Where an employee understands the nature of a threat and can easily act to avoid it (e.g., wearing a hard hat, being polite, cooperating, performing a required task within their skill set), although the prospect of loss exists, it is unlikely to do much more than focus attention.

The concepts of challenges and meaningful performance goals inherently bring with them a real risk of failure and the consequences of failure. This elevates stress, sometimes to the point of focused motivation, and sometimes beyond that to the detriment of performance and well-being. This is where management skill comes in. For example in removing uncertainty, in providing signs and safety nets, in enhancing competence and confidence through matching tasks to people, in getting the mixture of direction and autonomy right for each individual, in allowing people to measure and manage their own step-by-step progress, in allowing people to access support (practical, emotional), and in managing expectations, pressure and workloads so that physical and cognitive fatigue is not a cause of reductions in capacity or performance.

There is also the other side of the motivation equation – anticipated rewards (notably intrinsic). For example, conversations about what that achievement would mean to them, and what it would say about them, their character and their skills to have taken on such a challenge. There may be opportunities to talk about what the broader implications for others might be too – how they could benefit or be helped from the achievement. There can also be room for risk contextualisation and minimisation, even to the extent of turning over a loss to see what’s on the other side. For example, in discussing what problems they might encounter, how they might deal with them, and how they are likely to feel once having overcome them – or perhaps even attempted to overcome them. Who they can turn to for advice or support, and how that would feel for them to engage with others along the way?

Fear and loss are inherent as possibilities in most things that are worthwhile, and many that aren’t. It would be as unhelpful to ignore them as it would be to unhelpfully emphasise them. A trusted manager will be open about the potentials for risk and loss, and just as open in ensuring they empower employees to be able to make choices that contain, minimise or eliminate them. Recognising and managing moderate risk is natural and a part of healthy brain function.

Managing high performance is a skill!

Here we have described two ways of managing performance. One is essentially extrinsic, where employees are asked to meet performance criteria set, and to varying extents rewarded or penalised, by a manager. The other is essentially intrinsic, where employees are asked to set and meet their own performance criteria based on their own hopes, standards and preferred identity (within viable boundaries).

Somewhere in the middle can comfortably lie a hybrid, where individual employees and teams can substantially influence their own measurable challenges and performance criteria linked to high organisational performance and external penalties and rewards (tangible and intangible) but also leverage intrinsic motivation (i.e., protect and enhance feelings of safety, connection, empowerment, identity and task reward). For most employees in most situations, somewhere near that is probably an ideal place to be. It’s the role of the manager to create a workplace culture where challenges and achievement are socially respected and valued, and to work with employees to find their personal sweet spots and help them to thrive, succeed and experience fulfilment and well-being from the motivation, focus and energy they channel into those highly productive activities and behaviours.

A manager’s personal fears or discomfort is not a good reason for not allowing team members the opportunity of performing, and feeling rewarded by, challenging work. Our neuromanagement training modules teach performance management skills and techniques for reducing conflict-anxiety when managing employee and team performance.