Our responses to stress are automatic – but, with intent and practice, we can learn to manually override them. The stress, or more accurately distress, response uses the same mechanisms as the fear response, in an attempt to not only fight or flee the source of the distress, but the feeling of distress itself. The distressed response is shown in the flowchart below in the red (evaluated threat) and black (unevaluated potential threat) paths. 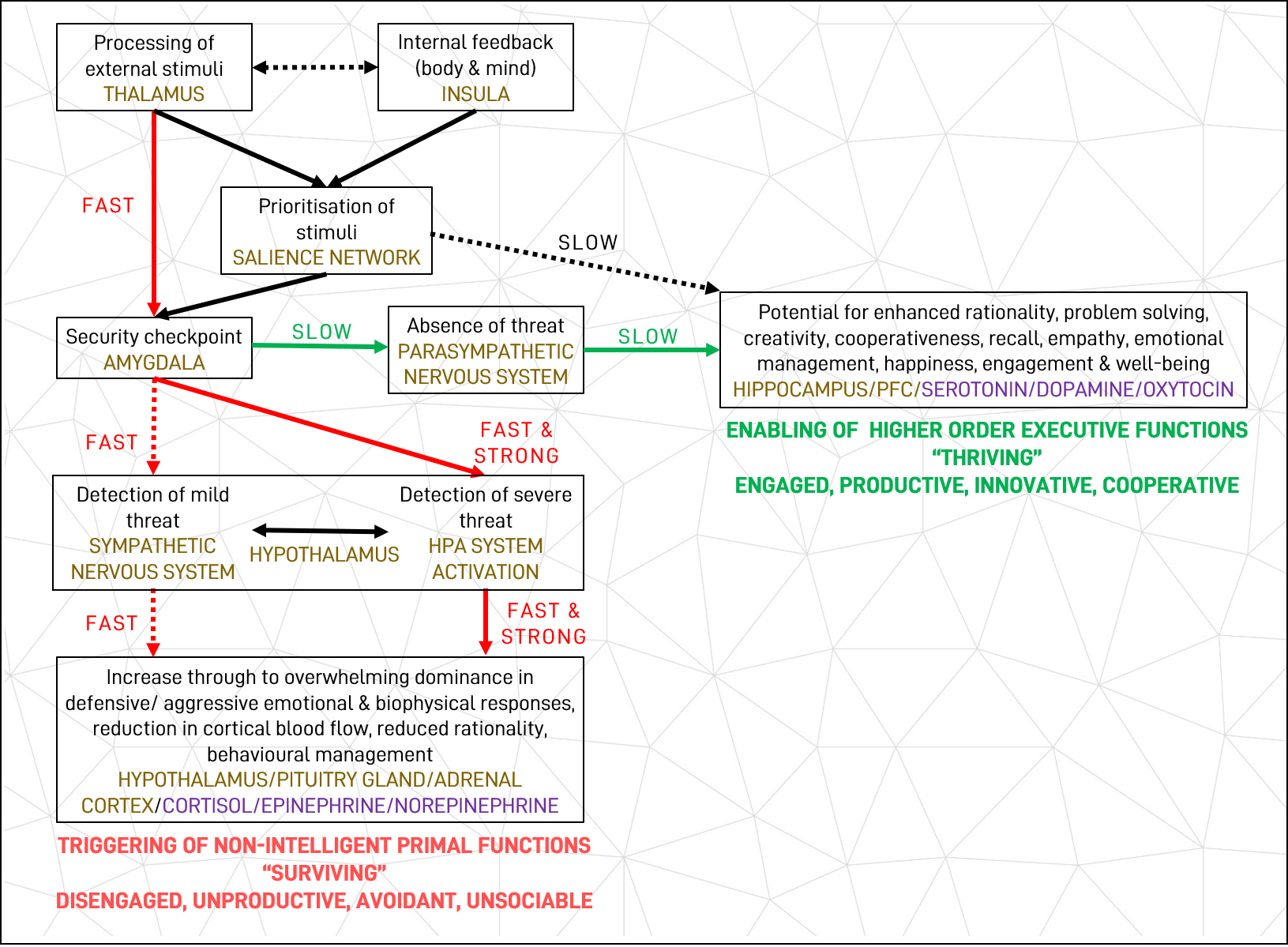 Note that the red, distressed routes are fast, as they have to be in stimulating immediate survival-oriented physical responses that can see aggression or retreat in physical actions, words and body language, all driven by non-rational, urgent and powerful impulses. This non-intellectual response mechanism, or a version of it, is shared with pretty much every other animal as a survival necessity.

In mammals specifically it diverts blood flow, and therefore energy, oxygen and capacity, from the prefrontal cortex on both the left and right sides, reducing the ability to understand and process information, concentrate on anything other than the threat, or to manage emotions or behaviours. And there’s a very good reason for that – when the tiger was chasing our ancestors, the only thing that mattered was getting away from it or fighting it off with every ounce of energy they had. Other things happened in those moments to make more energy available for the fleeing or fighting too – blood pressure rose, as did pulse and breathing rate to absorb more oxygen for the fight. Jaw muscles and throat constricted, and primal yells and screams may have accompanied that too. At the same time, blood flow and energy was diverted from non-essential tasks like digestion, immune system and, as described earlier, “smart” thinking (the brain uses a lot of energy – about 20% of daily intake). All of this is very useful when a fast and all-out physical or physically-intimidating response is appropriate – but useless and counterproductive in the workplace.

Seymour Epstein usefully conceptualised two different brain systems that usually work together to moderate the influences of, potentially, over-reactivity and endless procrastination. The first, and most primal, he identified as the “emotional/intuitive system”, based around what Paul Maclean called the mammalian brain (linked to somatosensory and emotional experience, and the reservoir of implicit memory, being the things we know but perhaps don’t know from where and can’t put into words, a key part of intuition and core belief systems) and the reptilian brain (linked to nonconscious direction of action to satisfy bodily needs, including the coordination of basic movement and instinctive responses). These regions don’t require cognitive processing, or indeed awareness, to function, and are vital in stress and fear responses in being able to instantly respond with DNA and experience-driven action.

The second system proposed by Epstein is the “cognitive/rational”, based in the neocortex, the “smart” region that is much larger in humans than any other species and is also the last and slowest to grow. It may or may not not be the home of consciousness, but it is certainly where we try to make sense of consciousness and get to make deliberate choices that are not always driven by a primal need. This system is highly capable, with the front left side excelling at imagination and complex problem-solving, and the front right side specialising in higher-order emotional awareness and control (both in conjunction with other regions, especially the hippocampus, which is part of more ancient regions that do some of these things, albeit typically at lower levels of complexity).

These systems are not equal. The emotional/intuitive system is much faster and much stronger, and (particularly through the amygdala) acts as a sign-off on any decisions made by the weak and slow cognitive/rational system. We like things to be right, but we much prefer them to feel right – yes, it’s illogical, but it’s the way the survival-first brain is designed. This means we are managed not by education, but emotions, and not by information, but by intuition. But to manage distress in ways that are more helpful in a modern workplace environment, emotional/intuitive reactivity to distress is often unhelpful, if not unacceptable. And that means techniques need to be developed by individuals that will firstly allow them to recognise when and how stress responses are affecting them before they simply react, and then to intervene to moderate them. The basis for such an intervention, as part of a process, looks like this:

The blue sections show the combination of awareness and intervention in action. Key to this becoming a skill that can be useful when needed most is the act of practised awareness of one’s own emotional state (mindfulness) as a part of the stress response process to a stage where it can become as automatic as the stress response itself. The ability to buy some time, space and capacity for emotional calming and clear thinking by slowing autonomic responses is the first step to habitualise so that it , in itself, becomes an automatic part of the stress response. For example, intentionally slowing breathing and keeping still, relaxing muscles and, where possible, removing oneself from the immediate stress environment either figuratively or literally, or by adding context, or by whatever coping mechanisms an individual might develop and find helpful in allowing blood flow to return to the PFC so that emotions, comprehension and problem-solving can be enhanced.

There are many mindfulness, meditation, reflection and energy-expulsion techniques that are very successful in helping different people in different situations. Some are more helpful in the moment, some are helpful in preparing for potential moments, and some are useful in burning up stress response chemicals (such as vigorous regular exercise) so that the body and brain can remain in or return to normal healthy functioning. All of them require dedication and practice. Mindful awareness, in particular, requires practice when stress is not present, allowing neural circuits to build and strengthen in so that they are available, and feel good at the time (your emotional/intuitive system doesn’t like, and actually can’t even find, novelty when dealing with a crisis – it much prefers to return to well-worn paths, whether they work or not).

The ability to manage stress responses is a learnable skill that is useful for every employee, important for those in leadership roles, brilliant for well-being, and essential for resilience. Stress management also enhances success, fulfilment and well-being in every facet of life.