There are three fundamental processes involved in the neuroscience of motivation. They govern every action choice that people make at every moment of every day, consciously and non-consciously, from absent-mindedly scratching an itch to taking on the most difficult challenges stretching out over long periods of time. The motivation processes are aimed at prioritising action choices that are most likely to enhance immediate survival or coping – and then pleasure or thriving. If you understand these processes, along with the limitations and biases inherent in them, you can start to become more effective at influencing them in yourself and others. 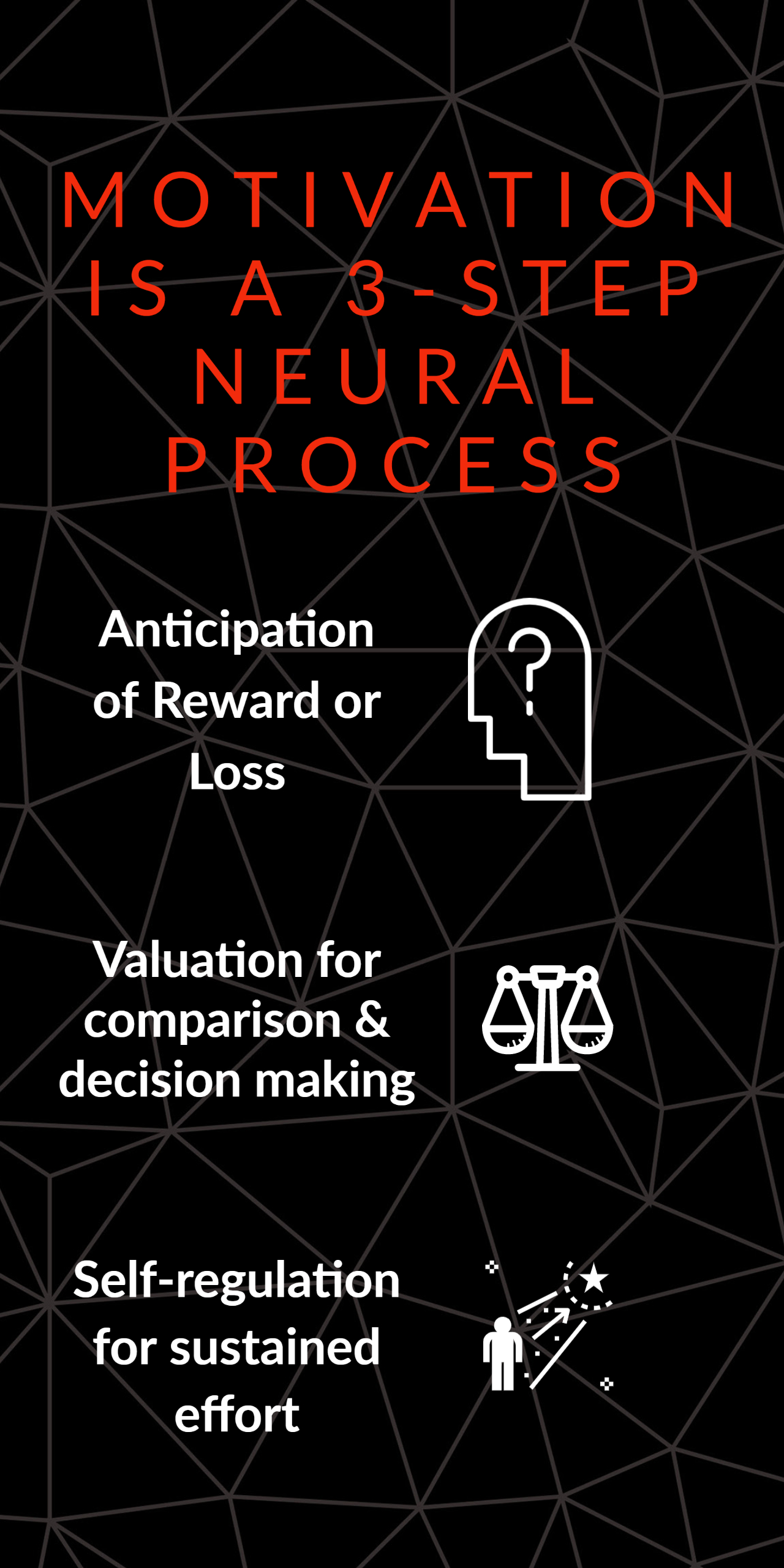 The first is the mesolimbic dopamine pathway (includes ventral tegmental area, amygdala, caudate, putamen and nucleus accumbens). It seeks to motivate behaviours by associating them with predicted consequences, using environmental, experiential and genetic influences to estimate and anticipate likely rewards.  The greater the reward predicted, the stronger the motivation is likely to be in achieving it, despite increased effort.

The use of a single process means that all rewards, and therefore all action-options, while not objectively estimated on an equal basis, involve the same prediction and response mechanisms. This is a necessity of course, because rewards and the action-options believed to be associated with them need to be comparable for choices to be made and sustained.

Anticipated or feared loss, as well as reward, is a part of this prediction process. Read more about understanding and influencing reward prediction

The second is the valuation pathway (includes the striatum, insula, amygdala, prefrontal cortex – particularly the ventromedial PFC and orbitofrontal cortex.) Importantly, the medial orbitofrontal cortex appears to consider appetitive (gain) value, whereas the lateral OFC concerns itself with aversive (loss) value. This means that reward is valued on a +/- continuum, enabling mild and controllable risk and loss to be predicted and acted upon without necessarily triggering FFFS responses.

It is also notable that the insula, a region associated with monitoring of internal feedback, senses and emotions, is linked with intrinsic motivation but not extrinsic motivation – this is a crucial distinction that is discussed in more detail in another article.

The valuation pathway is necessary because of opportunity cost – doing one thing in a given moment always means not doing (most) others. Researchers have likened reward valuation and comparison to a form of common currency (hence the use of the word “valuation” rather than “evaluation”) as a way to make action choices where options are varied and complex. Biases include valuing immediate rewards higher than longer-term ones, rating the risk of loss higher than the prospect of gain, giving higher values to habits as well as to novelty and learning (which is a little confusing), and of preferring higher effort, higher reward action-options to low-effort, low reward options (subject to safety). Understanding the significance of these biases is essential for understanding why people generate the emotions that drive action choices every moment of the day. Read more about influencing valuation

The third is the self-regulation/control network, involving the dorsolateral prefrontal cortex and the anterior cingulate cortex. Most actions are promoted subconsciously as impulses driven by urges, reactions, emotions, needs and wants. They tend to be powerful and immediate, and often bypass rational processing to be things we do without planning or much thought. They constantly present themselves in micro-seconds to the valuation pathway to challenge cognitive goals. A strong self-regulation network is vital for not allowing them to dominate immediate action-options that distract from goal-orientation.

Self-regulation is enhanced where rewards are available throughout ongoing action, rather than only upon completion, in the process essentially challenging the short-term low-effort fast-reward impulses that seek to distract. Individuals with higher self-regulation are more likely to be successful in maintaining focus, achieving goals, displaying resilience and managing their emotional states. Self-regulation has also been linked to IQ and EQ, and is also learnable for most, ideally from a young age and much for effectively where links with intrinsic motivations are strong. Read about how to influence self-regulation

Our NEURO-M Motivation at Work Training and Coaching Program is the ideal for all current and future leaders who see value in engagement, discretionary effort, performance and well-being across the whole team. Learn more about it here or inquire about the program now.