There are 3 systems that together govern our controllable action choices, from the smallest, non-conscious impulses (like scratching an itch) to the most difficult, demanding and complex challenges. Motivational neuroscience also incorporates the learning phase, where felt rewards modify future motivation. This article also refers to information provided in more depth in other articles, including:

The figure below shows how neural processes and action choices are shaped and influenced, generally shifting from left to right in micro-seconds to form the feelings, intuitions and drive that, far beyond any objective rationality, motivate action. 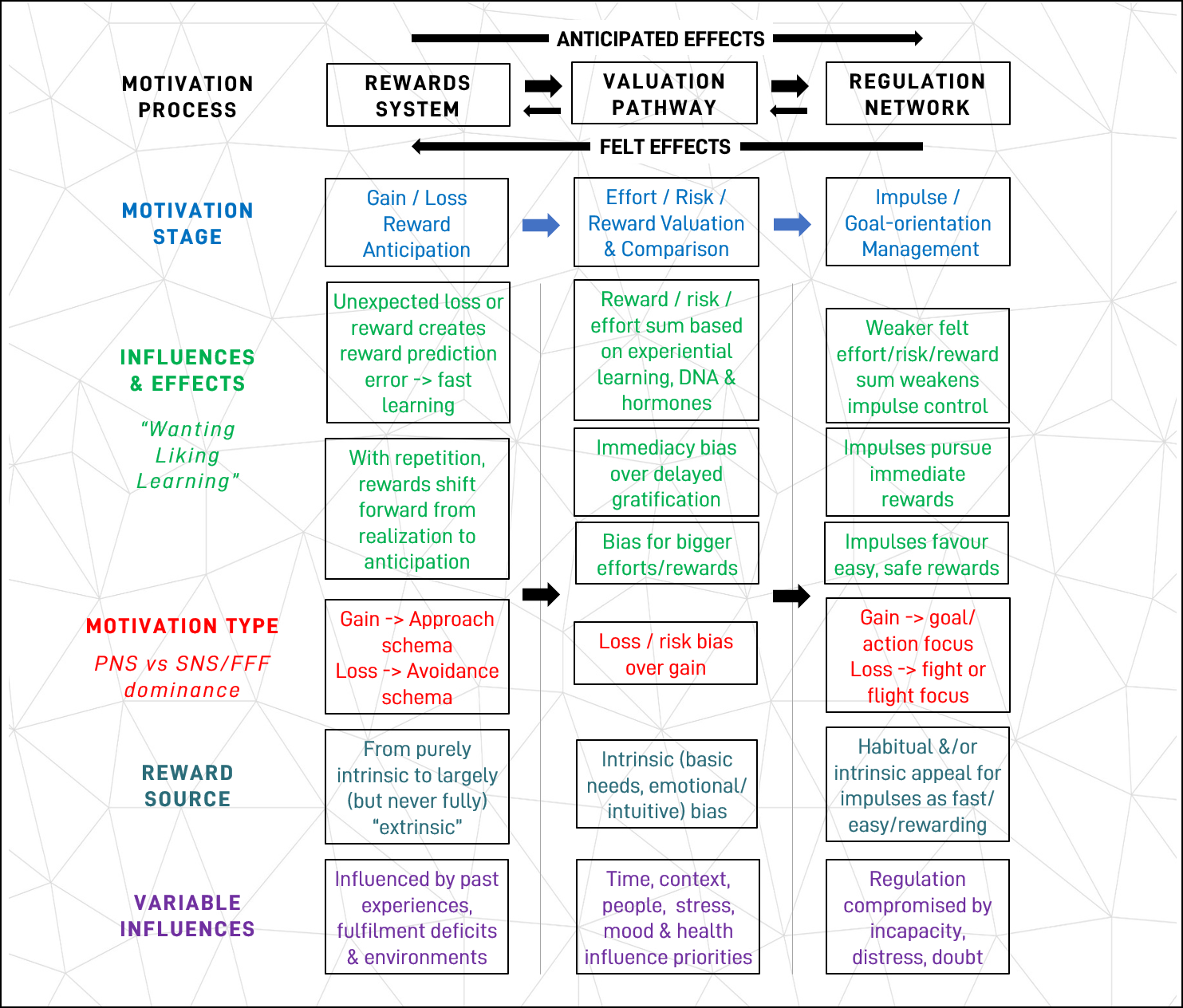 In the top line in black you will see the three neural systems that enable the motivation process, and in blue underneath their role. It is appropriate that the valuation pathway sits in the centre, not only of the sequence, but of any understanding of motivation – the choice to do one thing at the opportunity cost of not being able to do another is central to making or persisting with any action choice.

The Influences and Effects, noted in green, for the rewards system illustrate the role of experiential learning. Our brains are designed primarily for learning from personal experience, and then, to a lesser extent but still powerfully, through the experiences of others told as stories. Autobiographical memory then records the stories of our own lives, which can include our experiences of the stories told by others, whether as implicit (intuitively felt) or explicit (consciously recalled) knowledge. This is an essential part of the “wanting, learning, liking, learning” adjustment to anticipated rewards or losses. It’s also notable in this section that rewards can shift merely to anticipation – for example, just the thought of going on holiday to a favourite place or catching up with a dearly missed friend can make you feel good. However, the shift forward in reward can come at a cost – if the experience itself isn’t as rewarding as imagined, it can feel like a let down, a disappointment, despite being objectively fine. In turn, this reduces anticipation for next time, reducing its motivational influence.

There are five biases listed. The three in green reflect experiences, DNA-programming and hormones which attempt to shape actions at the most primal levels for survival of self and species. They will be felt as intuition and emotional drives, at times quite irrationally. The other biases noted in green privilege immediacy and big reward/big effort over little reward/little effort. These biases are useful for helping the regulation network control impulses, usually to the extent that is enough for most important things to get done. For those high in resilience, a strong regulation network is essential for the outcomes that take immense focus, risk and effort despite reward deficits, and even losses (such as pain, discomfort or sacrifice) along the way to delayed gratification.

The forth bias is shown in red with motivation type, recognising the compelling influence of the prospect or fear of loss in comparison to the prospect of gain. The impact of these response systems on performance, behaviour and well-being are immense, as they evolved to be tens of thousands of years ago as primal reactive survival systems when the world was a much more physically unpredictable and dangerous place. While the prevalence of physical danger has reduced for most of us most of the time, neurobiological systems and responses remain designed for fast physical action without thought.

The other bias is toward intrinsic rewards, where the insula (linked to internal feedback) influences the valuation process with mostly non-conscious urges and needs. The challenge for intrinsic rewards is that the brain learns or intuitively knows what impulses will be more immediately satisfying, and so more appealing to the insula in undermining effort aimed at delayed gratification. For example, a diet which is not linked to the basic need for identity enhancement, and so attract the support of the insula, is unlikely to be able to dampen the impulse for a quick sugary (dopamine-triggering) treat. For this reason, resilience, which involves strong impulse control and goal-focus, requires the insula to be on-side, which in turn means it needs to associate unhelpful attractive impulses with a loss of basic need fulfilment, rather than a shortcut to achieving it, and to reward the resistance of those impulses. (You can read more about this in the resilience articles.)

The final section, in purple, relates to the things that can change from experiences, moment to moment and context to context. Rewards are contextually estimated, including in consideration of deficits in safety or current fulfilment of basic needs. For example, a person who feels lonely at home is more likely to be motivated by the opportunity to interact more often and develop close relationships at work. An employee who feels they cannot fulfil their need for empowerment through their work is likely to seek fulfilment through the satisfaction of other needs, perhaps in identity through gaining attention as the office gossip, or doing unproductive things that are immediately rewarding like using social media at work. There is also another important aspect here – that of health and mental state on the ability to regulate emotions, thoughts and action choices. For example, someone who is already stressed will find controlling their emotions & focus difficult, where someone who is physically unwell may simply not have the energy to continue to allocate effort or concentration.

How can this be useful in the workplace?

While motivation is a simple 3 part process of estimation, comparison and impulse management, how it plays out in the workplace is a little more complex and uncertain. Things employers can do to support the capacity of employees to make and stick with action choices that are good for productivity, culture and personal well-being include:

For example, a manager came to me for advice in how to work with a junior employee whose output was poor and was regularly observed talking to fellow employees to the extent that they were being distracted from their own work by him. Immediately, it was obvious that he was more motivated to talk to his colleagues than to work at an acceptable pace because it was easier, less risky and/or more rewarding for him to make that action choice. It soon emerged that he was never respected or appreciated in accordance with his work output, and so for him increasing effort was not linked to increased rewards – simply because he was experiencing no rewards or losses.

When this was explained, his manager quickly saw the connection and, after estimating that the young employee’s productivity should be about 3 times what it was, challenged him to increase it the next day by only 50%. The employee responded by saying that he would not only do that, but that he would double it, a claim which worried his manager as he didn’t want the employee to set ambitious goals statements and then experience failure despite modest welcome improvements. The employee met his own target that day, and the manager responded with sincere thanks, joy and appreciation – he was really happy for him. Within a week the employee had achieved his own new target, being a tripling of his output, without his manager asking him to, and could be seen with a spring in his step and a new attitude toward his work – and his manager.

The young employee, whose experience had changed from being unappreciated and disempowered to feeling highly empowered and respected while building a meaningful connection yo a figure of power within that workplace social system, influenced all three parts of his motivation system by increasing anticipated reward in at least 3 areas of basic (intrinsic) need, increasing the value of working compared to the value of talking, and focusing on outcomes that involved self-regulated effort. This is the key to seeing the neuroscience of motivation in action – connecting observed behaviours with the process that drives them, and then creating the contexts in which people can motivate themselves toward action choices that are more helpful for them and those around them.