Action-choices are made either to protect the loss of something, or to gain something, linked to basic safety or need fulfilment. When we act to gain something, typically as a dopamine-based reward linked to the fulfilment or enhancement of an basic (intrinsic) motivational need, we usually adopt an “approach” schema, drawing on our intellect, attention, energy and self-management in how we think through challenges, act, cooperate and maintain effort.

Approach schema actions typically arise from anticipated gain or pleasure either doing or arising, directly or indirectly, as a result of those actions. Because approach schemas aren’t dominated by thoughts of fear or risk, defensive mechanisms which reduce cortical blood flow, self-regulation, sociability and trust are largely not active. This allows for optimal cortical performance, in turn supporting work performance, behaviour, social interaction and well-being. Dopamine, serotonin and, when working with others, oxytocin, energise, facilitate and reward naturally, making work productive, healthy and enjoyable.

Avoidance schema actions are directed at avoiding pain or loss. But, more influentially, the prospect of loss triggers reactive physically-biased neurobiological responses behaviours, demoting slow cognitive capacity while promoting fast combat or escape reactivity. This is a normal survival mechanism for our neolithic brains and bodies. Major chemicals include cortisol, epinephrine and norepinephrine – all designed for, and for recovering from, physical action – but not for intelligent thought or longer-term health.

Approach / avoidance mix options aren’t measured equally. Our safety-first brains typically rate the threat of loss twice as strongly as the possibility of gain – this is natural, as the neolithic human who underestimated risk didn’t survive to pass on his or her genes, whereas the ones constantly on the lookout for, and reacting fastest to, threats survived. We can’t help but be risk-averse and reactive (high self-regulation notwithstanding).

This means that, in the workplace, employees are likely to respond faster and stronger to the threat of loss than a reward. For example, adding a $100 bonus to wages for achieving a set criteria, which then risks being deducted if that criteria is not met, is likely to drive employees strongly to protect something they feel is already theirs. If the bonus was not included, employees are less likely to be motivated as, whilst they don’t stand to gain anything, they don’t stand to lose anything either.

The problem is, when faced with the prospect of loss, brain processes change and people act differently. They think more narrowly and less creatively. They blame others and everything. They speak of unfairness, resent supervisors (the people unfairly punishing them) and become disengaged. So while a penalty for non-performance is more motivating than the same level of reward for performance, and so can reliably be expected to achieve a short-term outcome, the response process is aimed at immediate personal survival ahead of longer term considerations or the needs of others.

Reacting to threat of loss also doesn’t guarantee the responses a manager would prefer. It doesn’t take long for a threatened employee to act in any number of ways to prevent that loss, or to retaliate if they feel powerless to protect it. They may become militant and attempt to negotiate the conditions out of the reward, or to cheat to avoid losing them. They are less likely to cooperate or offer discretional effort generally. They may also prevent the threat or pain of loss in the simplest of ways – firstly by disengaging, and then by absenteeism or resignation. Basically, if I leave, you can’t threaten or take from me (as rational or irrational as that might objectively be).

The presence of a mild or background threat (e.g., a rule, deadline, process or other boundary) is an expected and normal part of life and, if felt by the individual to be understand and controllable, need not trigger an avoidance schema dominance. Rather, those potential threats can simply form boundaries – for example, if meeting a deadline is felt to be within the control of an employee, there is no cause for distress. However, if there are delays that are outside of the control of the employee, distress and avoidance responses can quickly rise, leading the employee to get angry (fight response) or blame others to shed personal responsibility (flight response). Clear and controllable threats can be expected to trigger mild avoidance responses as a normal part of living a safe life – we are genetically programmed to be Ok with them. However, uncertain and uncontrollable threats can be expected to trigger severe ones – we are programmed to respond that way as well.

Reinforcement Sensitivity Theory proposes that there is a behavioural inhibition system which moderates approach and avoidance responses through their own systems. While the concept of moderation is sound, the proposed behavioural inhibition system is nonexistent.  Rather, competing neurobiological processes (sympathetic nervous system vs parasympathetic nervous system) routinely moderate each other – the up-regulation of one causes the down-regulation of the other without the inhibition system imagined by RST.  However, in practical terms the result is the same – motivational schemas work not as an on/off switch, but on a continuum, as shown below. In this way, it is possible to see how approach-schema dominance, rather than purity, is ideally suited to the needs of the workplace. 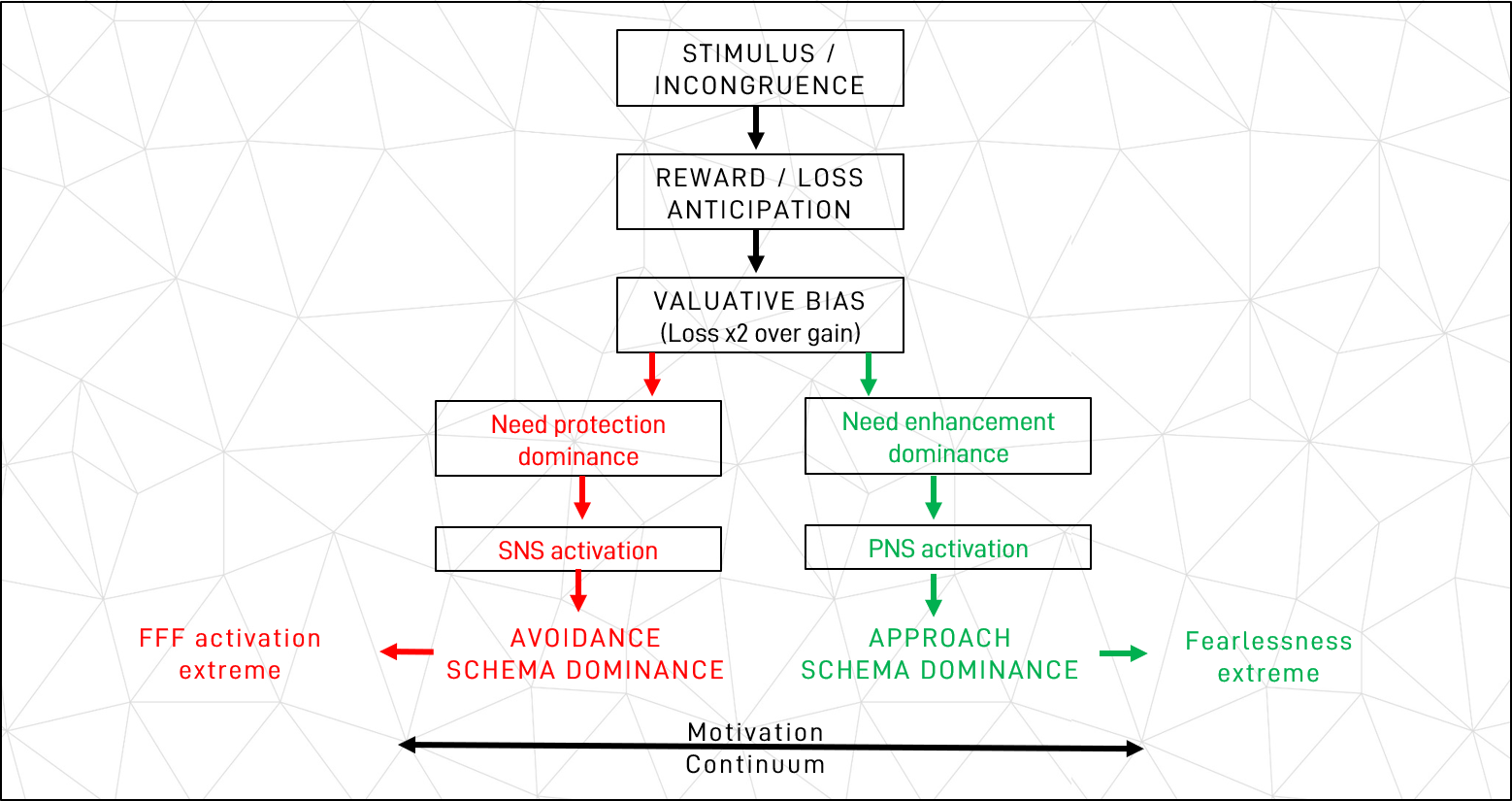